This week on the Music Crossroads of Texas, your host, Curtis Peoples, begins a two part series exploring the music of the Giant Side of Texas—West Texas—and the Giant Side of Music. He will play music written about, or that has a connection to cities and towns in the region.

Women of West Texas Music: This week we have Jenni Dale Lord in the KTTZ studios to talk about her music.

Crossroads of Music Archive Spotlight: The first recording of a Lubbock group: The Lubbock Texas Quartet on Columbia Records from 1930. 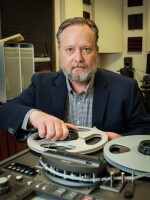 Curtis Peoples
Curtis Peoples, Ph.D., is the Archivist for the Southwest Music Archive and oversees the Crossroads Recording Studio for the Southwest Collection/Special Collections Library at Texas Tech University. He is a musician who has worked in the music business for four decades, numerous recording studios, and has been a production manager for many events. Dr. Peoples teaches regional music history classes and American media studies; his research centers on music and place.
See stories by Curtis Peoples