Three films as well as a panel discussion with the filmmakers will be held at Premier Cinemas at the South Plains Mall March 21- 24 at 6:30 pm. Tickets are free and can be picked up at the box office. More information is available here.

This transcript has been lightly edited for clarity.

Jo Harvey Allen: Thank you so much, Julia. We're excited because these are three fantastic films. We're fortunate because the first one is Sarah Driver's “Boom for Real: The Late Teenage Years of Jean-Michel Basquiat,” who is talked about with Leonardo da Vinci - he runs in that crowd. A New York street artist who died at 28 and his last painting, I think, sold for $110 million dollars. Then there's Anne Rapp's film about Horton Foote, who, of course, did the screenplay for “Tender Mercies” and also Harper Lee's “To Kill a Mockingbird.” This film is so inspirational that I had to leave and miss part of it to get my box of Kleenex. And the other film is about Guy Clark. It's Tamara Saviano's film, and it just opened SXSW. It was canceled due to COVID-19 in 2020, but it was selected again and, of course, won the best film in Austin. It's fantastic, you will love this film. So we're so happy they open at the Premiere theaters at the South Plains Mall at 6:30 p.m. Lubbock is so lucky to get to see these.

Sewing: Tell me a little bit about what this event would bring and what it means to the Lubbock community.

Allen: Well, it's open to the public where our center [The Terry and Jo Harvey Allen Center for Creative Studies] is committed to doing programs not just for the Tech campus, but for the whole community. These are really extraordinary opportunities to hear about a great singer-songwriter, artist and screenwriter. We just feel like everything we can present is something that they might not be able to hear about.

Sewing: Tell me a little bit about the inspiration behind this. What did it mean to you to put this together?

Allen: I'm personal friends with all these women and have watched what they have done. I mean, it's truly extraordinary. Anne has worked with over 60 directors - Spielberg, everybody, you name it, and wrote plays for Altman. Sarah worked with Jim Jarmusch - a lot of people love his films and she's done so much. And Tamara Saviano is a three-time Grammy nominee and a winner who has worked with so many people and has written books and won awards. All these people are fantastic. So, just, the opportunity to bring to Tech all kinds of different programs. We're really committed to bringing just incredible people into Lubbock to do these.

Sewing: What do you think will be the most important takeaway from these screenings?

Allen: They're all different, but they're all inspirational. Anybody who's, I think, wanting to work in any area will come away uplifted by seeing these films.

Sewing: My last question for you would be if you could talk a little bit about the challenges and maybe the importance of women entering this sort of male-dominant field.

Allen: To honor so many women [who] have continued through the years to do incredible things, that’s not new at all. But to be honored and recognized, I think, is new. So we're definitely with this festival celebrating three, just incredibly creative, bright women who've just given us these beautiful gifts of film. 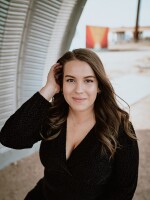 Julia Sewing
Julia is the Morning Edition Host and a radio producer with Texas Tech Public Media. She graduated with her bachelor's in electronic media and journalism from Texas Tech University, and her master's in mass communication also from Texas Tech University. She also is an adjunct professor of journalism at TTU's College of Media and Communication. You can follow her on Twitter @_julsew_.
See stories by Julia Sewing